Crib Coch is normally ascended via its east ridge from Bwlch y Moch, on the Pyg Track.

However, it can be ascended via its North Ridge, which is every bit as challenging as the main Crib Goch Ridge, and is not for the inexperienced (see the safety note at the bottom of this page). The North Ridge can either be accessed from Bwlch y Moch (on the Pyg Track), using the Fox’s Path, or from the Llanberis Pass at Blaen y Nant.

The Fox’s Path is a little known and little used path which runs round from the slopes of Crib Goch round to Llyn Glas in Cwm Glas.

On the map below, the blue line shows the traditional Crib Goch route from Bwlch y Moch on the Pyg Track. The red line shows the Fox’s Path heading off at grid ref SH 62886 55225, where a faint path bears off to the right to head for a distinct outcrop on the skyline, this being the start of the North Ridge approach to Crib Goch, again marked by the red line. This path is nowhere near as visually obvious as the traditional Crib Goch ascent path.

The North Ridge route joins the traditional route at the point where the narrow traverse begins. 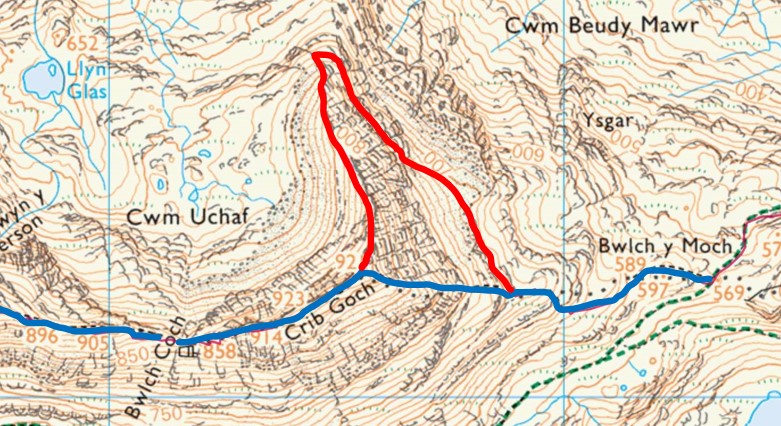 The Fox’s Path is not marked on the OS map. However, it is both marked and named on OpenStreetMap, where it is named “Llwybr y Llwynog”, the Welsh name (and thus making it “Fox’s”, not “Foxes'” 😉). The Fox’s Path continues round to Llyn Glas in Cwm Glas, as shown on the map below.

Click here to see the Fox’s Path marked on OpenStreetMap.

Note: Crib Goch should not be attempted in adverse weather conditions; ideally it should be undertaken in dry conditions with very little wind (gusting at less than 30mph). The Llanberis Mountain Rescue team advise that this route is extremely dangerous and should not be attempted by beginners or novice walkers – accidents are common, and every year people have to be rescued from Crib Goch; sadly almost every year sees fatalities too. Dogs should not be taken on this route.

Back to the top

Back to the ‘Other Paths & Routes’ menu

Back to the home page

Everything you need to know